Source: Why Bernie vs Hillary Matters More Than People Think

When I heard about the earthquake in Nepal and saw the pictures, it made me remember the earthquake that hit my country Haiti 5 years ago. I remember what that felt like: I remember the dust, the panic, the fear because you can no longer trust the ground beneath your feet. Even though Nepal is halfway around the world, I feel you are my family because I know some of the pain you are going through now.

Even in the photos and videos, I see so much solidarity between Nepalis – and I would like to ask my Nepali brothers and sisters to hold onto that. We Haitians stayed strong through solidarity in the few days after the earthquake, and then we became divided. Don’t let that happen to you – you are a proud people with so much history and culture, so hold onto that and you will emerge…

When Kendrick Lamar released his sophomore album, To Pimp A Butterfly (2015), I was in the middle of teaching a unit on Toni Morrison’s novel, The Bluest Eye (1970). My freshmen students were grappling with some big ideas and some really complex language. Framing the unit as an “Anti-Oppression” study, we took special efforts to define and explore the kinds of institutional and internalized racism that manifest in the lives of Morrison’s African-American characters, particularly the 11-year-old Pecola Breedlove and her mother, Pauline. We posed questions about oppression and the media – and after looking at the Dick & Jane primers that serve as precursors to each chapter, considered the influence of a “master narrative” that always privileges whiteness.

Set in the 1940s, the Breedlove family lives in poverty. Their only escape is the silver screen, a place where they idolize the glamorous stars of the film industry. Given the historical context… 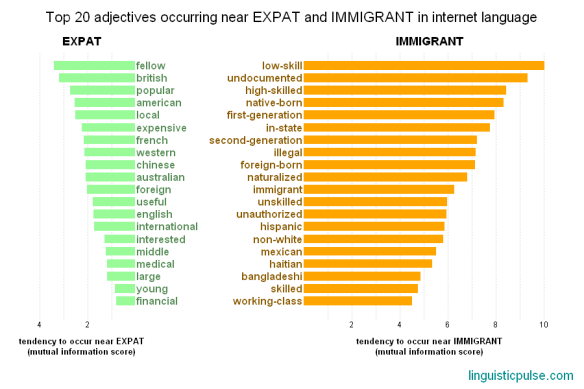 On Friday, the Guardian published an article by Mawuna Remarque Koutonin arguing that the word expat (short for “expatriate”) is a label “reserved exclusively for western white people going to work abroad”. According to Koutonin, the word immigrant is set aside for everyone else — those considered to be part of ‘inferior races’.

Very important, critical food for thought, particularly for scholars of color (and their family, friends, and allies).

When a person of color is killed by a police officer, or badgeless vigilante, it strikes at the moral fabric of America but more viscerally at the psyche of every person of color with a beating heart. Each strike, blow or shot to their flesh pierces through our collective identity in ways sometimes articulated by great poets, demonstrated by activists old and emerging and mapped by social workers, theorists and spiritual gurus. Much more often, however, we do not have words or faculty to articulate that fire that emanates within our bones; gifting us with a source capable of birthing both revolutionary rage and cancerous infernos. There are simply those things cannot be spoken, because the tongue was never meant to fathom such violences.

During the most recent trend of state-sanctioned, or…

It’s not about whether blocking the passage of an ambulance is worthy of a legitimate complaint–it’s about when those complaints arise, and by whom, that we start seeing larger social problems.

Boston-area #BlackLivesMatter protesters made national headlines today by chaining themselves to roadway railings and 1,200-lb construction barrels, bringing traffic into Boston on I-93 N and S to a halt during the morning commute.

According to a press release posted to the Black Lives Matter Boston facebook page, the diverse group of protesters sought to bring attention to the fact that systematic racism isn’t just an issue in other places, like Ferguson, MO. Similar problems happen right here, at home, and have been happening for decades.

“Today, our nonviolent direct action is meant to expose the reality that Boston is a city where white commuters and students use the city and leave, while Black and Brown communities are targeted by police, exploited, and displaced,” said Korean-American activist Katie Seitz.

For the record, this post is in direct in response to the many people who’ve asked this either through a personal message or as part of a larger conversation regarding the heightened national attention towards police treatment of People of Color in the past few months. Many who ask this question truly believe that they are asking it sincerely and really do want to help, so it can be frustrating for them when responses range from silence to sincerity to sarcasm. This happens for many legitimate reasons, but my purpose here isn’t to address why that is—rather, I want to respond directly to the question of “what can I do?”

Now, many people who have asked me this question identify as white (or pass/are raced as white), are still trying to understand racism beyond interpersonal mistreatment of others based on biological or phenotypical markers, or were unaware of the extent of the ties between state/police violence towards poor people/people of color, among other reasons. The loose and non-exclusive categories I just named made up a large portion of the types of folks from whom I, personally, got this question, almost all of whom live in the U.S., so my thoughts are tailored accordingly.

So for those asking this question, who are interested in doing something to help people but feel new, out of place, uninformed, or otherwise just aren’t sure where to start, it may be useful to think about the following as possible resolutions for this new year:

One thing that didn’t make this particular list is standing in solidarity with oppressed groups. However, not only does this kind of go without saying, but can mean VASTLY different things for different people—for example, not everyone can take off work to be at every protest or every meeting or fight every battle, and no one expects that. The intent of the above resolutions was to help in being a more effective and efficient ally who is stands in solidarity with others

I hope these ideas, in addition to all the other lists of actions you can find below, inspires you to reflect on ways you can aid in achieving a more equitable society in 2015. Feel free to leave any questions, comments, concerns, or suggestions, and I sincerely hope that this next year is better than the last.

Thanks for reading, and Happy New Year!

I take no credit for any of the following works and/or lists of resources, but I think they might be useful. Some information is repetitive, some of it is conflicting, and some of it contains content with which I don’t particularly agree—however, I think they are all perspectives worth considering.

A great catch-all site and an overall easy read is the Racism School Tumblr: http://racismschool.tumblr.com/

13 Must Reads for the Black Feminist in Training: http://www.buzzfeed.com/ashleyford/13-must-reads-for-the-black-feminist#.piBv2zVaq

How to Be an Ally

5 Ways to use White Privilege: http://www.huffingtonpost.com/jordan-houston/5-ways-to-use-white-privi_b_5991622.html

How to Be an Ally if You Are a Person with Privilege: http://www.scn.org/friends/ally.html

12 Things White People Can Do Now Because Ferguson: http://qz.com/250701/12-things-white-people-can-do-now-because-ferguson/

Some Tips for White People Who Have Opinions on Ferguson: http://feministing.com/2014/12/10/some-tips-for-white-people-who-have-opinions-on-ferguson/

How White People Can Be Allies: http://www.theroot.com/articles/culture/2014/08/ferguson_how_white_people_can_be_allies.html

29 Harmful Things White People Do And What We Can Do Instead: http://bmoreantiracist.org/white-people/29-stupid-things-white-people-do-and-what-we-can-do-instead/

Your Discomfort is Progress: http://www.theguardian.com/commentisfree/2014/dec/07/white-people-ferguson-race-conversation

When White People See Themselves With Black Skin: http://www.huffingtonpost.com/2014/12/15/virtual-body-swapping-racism_n_6328654.html?cps=gravity

Most White People in America Are Completely Oblivious: http://www.alternet.org/most-white-people-america-are-completely-oblivious

Race and Policing in America: http://www.chicagotribune.com/news/opinion/commentary/ct-ferguson-police-michael-brown-darren-wilson-black-men-whites-perspec-1125-20141125-story.html

Whites are Biased and They Don’t Even Know It: http://www.washingtonpost.com/blogs/wonkblog/wp/2014/12/08/across-america-whites-are-biased-and-they-dont-even-know-it/

This work is licensed under a Creative Commons Attribution-NonCommercial-NoDerivs 3.0 Unported License.